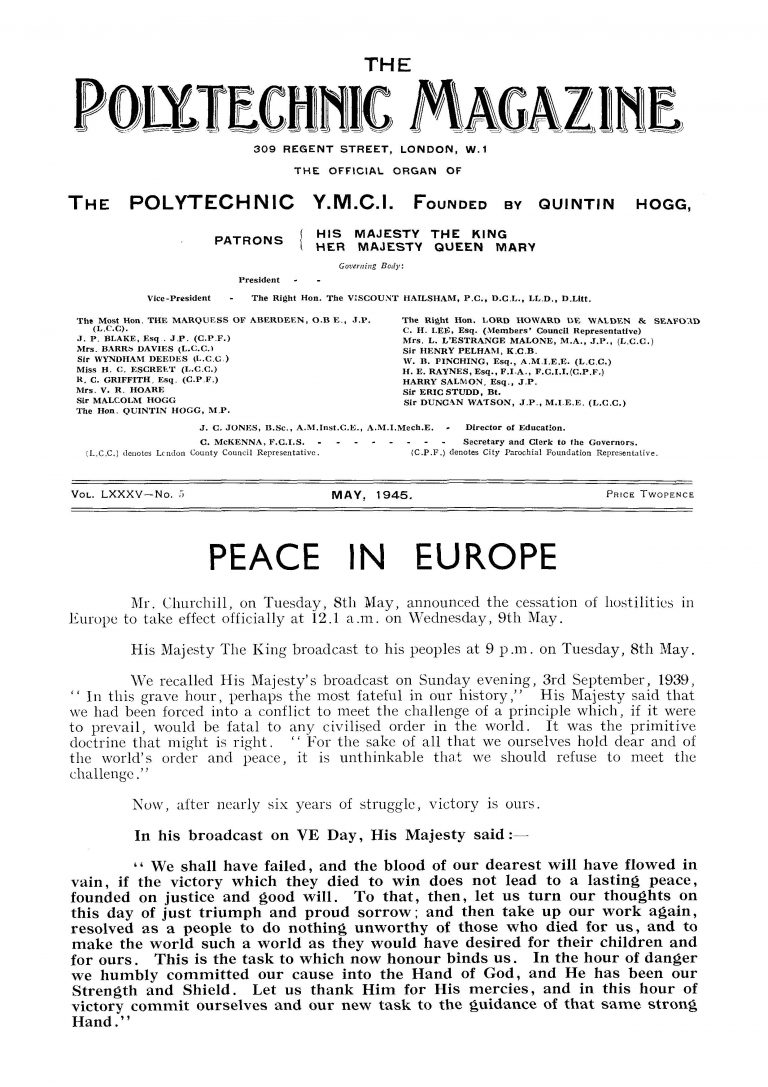 On 8 May 1945, Victory in Europe was declared.  Across London, public celebrations took place with crowds taking to the streets to share their joy.  However, Churchill advised the public to bear in mind that the war was only won in part.  War with Japan was still ongoing and VJ Day would not come until 15 August 1945.

Whilst the Regent Street Polytechnic welcomed the news of VE Day, they heeded Churchill’s note of caution.  The announcement of peace in 1945 was much more sedate than it had been for World War One.  In November 1918, the Polytechnic Magazine reported that a flag was hoisted, the streets became alive with an animated crowd and the Thanksgiving Service in the Great Hall was standing room only.  In contrast, the Magazine of May 1945 (above) simply printed a passage of HM The King’s speech.  No mention is made of any Polytechnic celebrations, either following VE Day or VJ Day.  With many Poly members fighting in the Far East or still in active service in occupying armies, it is understandable that the Poly’s reaction to VE Day was understated.  Indeed, the Magazine noted,

‘Amidst all the rejoicing which this day serves, our thoughts turn towards those of our friends who have not lived to see the dawn of this day; to those of our people who are, at the moment of writing, making their way back to us from the Prisoner of War camps; but also and very specially to those who are still facing the perils of war in the Far East.  We do not and must not forget that they are not within the sphere of influence covered by the good news though it will rejoice their hearts as it has cheered ours…we are longing for the day when a V message will come which will include them and help bring them back to us again.’

The above excerpt highlights the importance of consulting archives for contemporary accounts of key historic events.  With 75 years of hindsight, it is easy for us to step back and see the importance of VE Day.  It was clearly a momentous occasion in 1945, but we must be careful not to assume that key events in our history had the same level of significance at the time as we might now attribute to them.  On 8 May 1945, the war was not yet over.

During the conflict, the Polytechnic did what it could to help the war effort.  The Magazine notes that,

‘When it comes to being fully written the record of the Polytechnic during the war will indicate a very considerable contribution to the war effort, with most of the members and ex-students, as well as many of the staff, serving with the Forces throughout the world, or engaged in some essential form of National Service.’ (May 1945)

The Poly’s war effort included training over 9,000 servicemen and personnel of the women’s services.  The sports ground at Chiswick became allotments, an emergency mortuary, and was later requisitioned by the Army and RAF.

Despite victory in 1945, the Poly’s War Comforts Section realized that there was a continued need for its important work.  It continued to provide parcels of food and other essentials to members in the Armed Forces who were not yet demobilised.  At the end of 1945, it had raised over £6460 (approximately £229,662 today).  It did not conclude its activities until Easter 1946.

To learn more about the Polytechnic during World War Two, why not look at our digitised Polytechnic Magazine, available online here.

Back to the blog