16th November -16th December is Disability History Month. In this blogpost, we look at two initiatives the University has been involved in during its history – rehabilitation of wounded servicemen during World War One and our Computer Centre for People with Disabilities, established in 1984.

The first major initiative occurred during World War One. The Polytechnic’s Direction of Education, Major Robert Mitchell CBE (1855-1933) was seconded to the government to organise the technical training of soldiers who had been severely wounded in the war. The work began in 1917 and continued throughout the 1920s.

Rehabilitation centres and training workshops were set up at Queen Mary’s Convalescent Auxiliary Hospitals at Roehampton, and at Queen Mary’s Workshops at the Pavilion Military Hospital, Brighton.  They were set up under Robert Mitchell’s direct supervision and to his specifications.  The training courses were also directed by him.  A contemporary account describes Mitchell as ‘one of the foremost authorities in the country on the subject of technical training which is now being universally adopted in the interests of our wounded men’ (The Future of Our Disabled Sailors and Soldiers, 1917).

Initial rehabilitation and training took place at Roehampton and Brighton with after-training in technical subjects such as electrical fitting and cinema operation taking place at the Polytechnic at 309 Regent Street using the Poly’s state-of-the-art equipment. 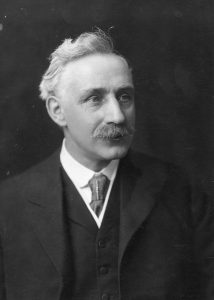 The University Archive contains an album of photographs of the training both at the Poly and at the other training facilities.  Photographs show men with injuries such as leg and arm amputations being trained in trades including carpentry, bootmaking and motor car building.

Due to Switzerland’s neutrality during World War One, many French and British Prisoners of War who had injuries significant enough to prevent them from further service were sent from crowded prisoner of war camps, where there was a lack of medical staff, to Swiss mountain resorts for remainder of the conflict.

The Polytechnic Chalets became lodgings for interned members of the British and Imperial Armed Forces. Under the management of Mrs Isabella Mitchell (1857-1949), wife of Robert Mitchell,  the men were nursed back to health and given rehabilitation and training.  Although we cannot find a definitive date in the Archive to suggest when this commenced, a photograph published in The War Illustrated in October 1916 shows Isabella Mitchell was by that time in Lucerne and in Jan 1917, The Polytechnic Magazine reports that there are 100 interned soliders staying at the Chalets. The Magazine suggests ‘they could be under the care of no one more sympathetic or capable’.

According to Susan Barton’s book Internment in Switzerland During the First World War, 2019, a very similar training model to that implemented by Robert Mitchell was also used at the Poly Chalets where ‘British internees developed skills working in carpentry, electrical work…leather bag making and watch-repairing’.

It is believed approximately 68,000 interned soldiers were moved to Switzerland during the war.

The Computer Centre for People With Disabilities

The second major initiative began in 1984 when the Polytechnic of Central London created the Computer Centre for the Disabled (later renamed The Computing Centre for People with Disabilities).  The Centre’s aim was to ‘use the high technology available at New Cavendish Street to the advantage of the disabled.  The demand has proved enormous.’ (Clarion, No 3, 29 May 1987).

The emphasis of the Centre was on tailoring training to the specific needs of those who attended.  Clarion of 29 May 1987 gives the following example of ‘a stroke victim in Dulwich Hospital who has only the use of her right foot, was trained to use a specially modified computer/word processor’.  It was one of the largest facilities of its kind in the UK for blind people and used techniques including speech synthesis to provide access to IT.

The Centre was open to students currently studying at PCL, to enable them to get the support they needed to successfully complete their course.  It was also the London Access Centre, meaning that it was recognised by the Department for Education as having a responsibility to support students with disabilities in other universities and colleges throughout the region.  It did this by helping students make the most of their grants, providing help and training and negotiating with Local Education Authorities on behalf of students.

With a grant from the European Social Fund, from 1987 the Centre provided 10 week courses for up to 30 participants at a time, enabling them to learn to use new technology followed by a work placement. Training was provided in business computing, remote working and desk top publishing.  HEFCE (Higher Education Funding Council for England) grants in the early 1990s and early 2000s enabled improvements to the Centre such as increasing their work with disabled students in the South East, the establishment of a Harrow-based assessment and advice service, the installation of lecture theatre loop hearing systems and a 2 year study with the British Dyslexia Association raising awareness of specific learning disabilities in schools and colleges.

The Centre continued its work until the mid-2000s.

We have created a Disability History tag on our Archive catalogue to enable users to find records we hold relating to the topic of disability.

Our colleagues in Learning Innovation and Digital Engagement have produced a timeline of Disability History at University of Westminster.

You can learn more about the Poly during World War One in our online exhibition:

More can be discovered about the rehabilitation of wounded servicemen in  ‘The future of our disabled sailors and soldiers : a description of the training and instruction classes at Queen Mary’s convalescent auxiliary hospitals, Roehampton, and at Queen Mary’s workshops, Pavilion Military Hospital, Brighton, for sailors and soldiers who have lost their limbs in the war’ by MA Cloudesley Brereton, 1917. A digital version is available via the University of Warwick https://cdm21047.contentdm.oclc.org/digital/collection/tav/id/4041/rec/1